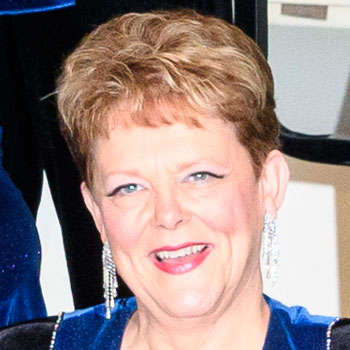 Denise has been a Sweet Adeline since 1985 but her interest in barbershop music dates back many years before that when as a child her parents took her to barbershop shows in Regina.  Having musical parents, Denise grew up with music and harmony in her life.  Sitting between a bass and an alto at church gave her no option but to learn how to harmonize.

How did Denise come to sing with Prairie Gold?  Denise tells this story.  “In December of 1984, the Prairie Gold Chorus sang as the special guests at the carol festival in Balgonie.  The Balgonie Baptist Church Adult Choir was also singing.  It so happened that I was the only alto in the choir.  One of the members of the chorus knew me from my work at the University of Regina.  Once back in the audience, one of the members of the chorus tapped me on the shoulder and asked me if I would like to sing with Sweet Adelines.  My answer was a resounding yes! My first rehearsal with the chorus was January of 1985 and I became a member about 4 weeks later. “

Since that time Denise has served in many capacities in the chorus – President, Vice-President, Secretary, Treasurer, Bookings, Nominations, Social Committee,  Competition co-chair for St. Louis, San Antonio, Greenville and Nashville as well as many other committees.  She was also the Chair of the Regional Convention and the Competition Coordinator for conventions in Regina.  During most of those years, she was also on the music committee serving as baritone section head and Associate and Assistant Director.  She became the chorus director in January 2010.